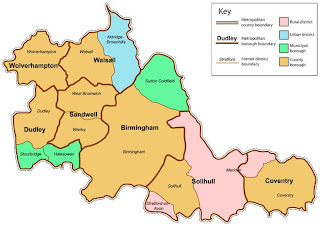 The Latin Mass Society has been served by diocesan representatives who have always represented the lay faithful as best they can in their aspirations for the Traditional Latin Mass. When it was suggested that I take up the vacant post in Birmingham, there were already several diocesan reps serving in different parts of the Archdiocese (Oxford, Worcestershire, Warwickshire, Staffordshire, etc). I knew that I wanted to be based in Birmingham city, and the original title was "Birmingham City and Environs" which I thought sounded a little vague. In actual fact, there are no clear cut boundaries to the work I do, but to give a better idea of my mailing list (sent from head office), I help represent people from all over the West Midlands. To date, the metropolitan county of the West Midlands includes:
Birmingham
Coventry
Dudley
Halesowen
Sandwell (West Bromwich, Warley)
Solihull
Stourbridge
Sutton Coldfield
Walsall
Wolverhampton
So its a big area, encompassing three cities (Birmingham, Coventry and Wolverhampton) and is the most heavily populated conurbation in the UK outside London. Now, I live in Smethwick, which is basically the centre of the "Birmingham & Black Country" and where I thought I would have the best presence. However, I would not exclude any part of the West Midlands in my remit. I just thought "LMS West Midlands" sounds less precise, and doesn't acknowledge the fact that our diocese is centred on Birmingham, where the Cathedral is, and indeed the Birmingham Oratory with the highest activity of Extraordinary Masses in the region. Besides, other LMS reps in the future might consider themselves better placed to represent Coventry, for example, which seems rather distant for me!

It was brought to my attention that Wolverhampton does not like to consider itself part of the Black Country. I appreciate this, having worked there and learnt a lot of its history connected with the large church of St Peter's. Having gained city status in 2000, St Peter's is almost like their (Anglican) Cathedral, whose benefactor Lady Wulfrana helped build the original monastery there in 994. However, modern usage seems to place the whole of the western part of the West Midlands under the umbrella of the Black Country, a term thought to be derived from the black smog of the industrial revolution, and the numerous coalfields in the region (some of which fall under Wolverhampton).
It is a great challenge to me to get to know this area, having only lived here for eight years. I have yet to fully understand, let alone master, the ancient English dialect spoken here (probably the last such example of early Chaucer's English)! But I am certainly enjoying it so far and welcome any further suggestions of where to have masses. So far the extra masses outside the Oratory are being requested by either clergy or other parishioners, and therefore I do not see my role as leading a 'pressure group,' but rather helping network like-minded Catholics who can work together to glorify God.
Posted by Unknown at 15:28