The only High Mass in the country for Candlemas will take place at the Birmingham Oratory on 2nd February at 11am. The music is listed in the photo on this post. There will also be a Sung Mass and procession (weather permitting) at St Mary-on-the-Hill, Wednesbury at 10.30am. 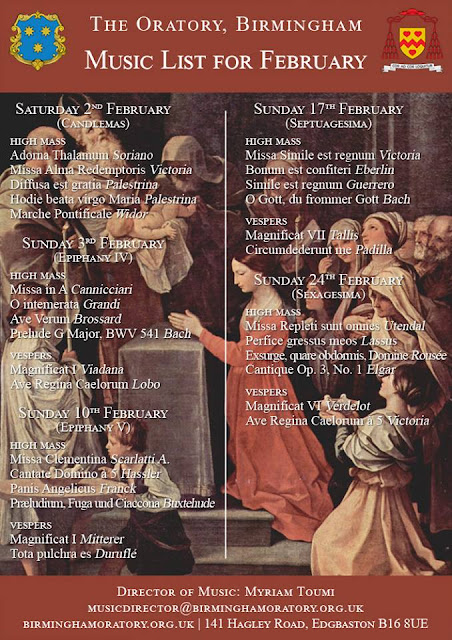 Just a reminder that the final Solihull first Friday Mass will take place on 1st February at 6.30pm.

Today is the Feast of the Conversion of St Paul, the last day of the Octave of Prayer for Christian Unity. It is also the occasion of the first fourth Friday EF Mass at Sacred Heart and All Souls Catholic Church (1151 Warwick Road, Acocks Green, Birmingham, B27 6RG), which will take place at 7pm.

This is fortuitous for the traditional Catholics who live in the East Birmingham and Solihull deanery because the first Friday Mass at St Augustine's in Solihull will be discontinued from March, with the last Mass taking place on the 1st February. As you may be aware, Fr Daniel Horgan who used to celebrate the Mass moved to Ireland in September and the Mass had been covered by neighbouring priests until now.

As the Octave of Christmas comes to an end, below are the details of additional Masses at St Mary-on-the-Hill inWednesbury until Candlemas - these are also noted in the calendar in the sidebar.