Retreat on the Theology and Spirituality of the Traditional Mass 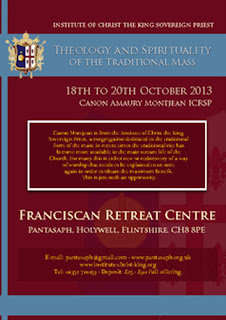 I have recently added a couple of regional LMS websites to my sidebar. If I am missing any, please leave a comment on this post.

One of the sites I have added, for LMS Wrexham, highlighted a retreat at Pantasaph organised by the Institute of Christ the King Sovereign Priest on the Theology and Spirituality of the Traditional Mass, which will take place between the 18th and 20th October. I believe this had been planned before but was cancelled due to a lack of interest, so please think about supporting it if you are able. The cost for the weekend is £90, and it takes place at the Franciscan retreat centre at Pantasaph, a fine setting where I attended the LMS Latin Course last year. For more information, download a flyer and/or booking form.

The ICKSP have recently received a heritage lottery grant for the restoration of their church in the Wirral. A report by the BBC can be found here.
Posted by Louis at 12:33 0 comments 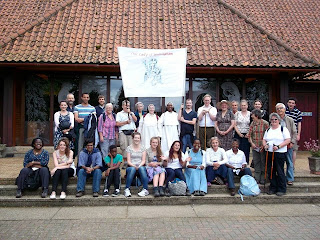 There will be a Low Mass tomorrow at the Birmingham Oratory at 6pm for the Feast of the Assumption.

If you have not got any plans for the Bank Holiday weekend, perhaps you would consider joining the LMS pilgrimage to Walsingham? Unfortunately, work commitments means I am unable to participate, but I was able to join the Blessed John Paul II pilgrimage organised by the Dominican Sisters of St Joseph last weekend after being informed about it by Joanna Bogle, who writes about her experience here. Having experienced it, I can thoroughly recommend it, although I would suggest you are equipped with a good pair of walking shoes! Above is a picture taken by Sr Theresa of the Community of Our Lady of Walsingham soon after the pilgrims arrived at the Slipper Chapel.
Posted by Louis at 17:45 0 comments

Our Lady of the Snows


Due to Fr George's pastoral commitments, this week's Friday Mass (9th August) at West Heath has been cancelled. However, no doubt in part due to the first Friday devotion, we are blessed in the West Midlands with two other regular Friday evening EF Masses at the Oratory at 6pm and Our Lady of Perpetual Succour in Wolverhampton at 6.30pm. Perhaps if you usually go to West Heath or were thinking of going this week you might consider one of these alternatives instead - more details are available in the sidebar.

It was, however, possible to satisfy the weekly fix of a Fr George EF Mass tonight as he celebrated the first Monday Mass at Our Lady of Mount Carmel Church in Redditch (pictured above), a satellite town of Birmingham which strictly speaking falls under Worcestershire but has obvious links with our area. In the Novus Ordo, the Optional Memoria today is the Dedication of the Basilica of St Mary Major. Until 1969 though and therefore in the 1962 Missal, it was known as Dedicatio Sanctæ Mariæ ad Nives (Dedication of the Church of Our Lady of the Snows), based on the following (probably) mythical story:


There lived in the Eternal City a nobleman, John and his childless wife, who had been blessed with much of this world’s goods. They chose the Mother of God as the heir to their fortune, and at the suggestion of Pope Liberius, prayed that she might make known to them how to do this by a particular sign.

In answer, the Virgin Mother during the night of August 5, appeared to John and his wife and also to the Holy Father, Pope Liberius, directing them to build a church in her honor on the crown of the Esquiline Hill. And what would be the sign that John and his wife had requested?

“Snow will cover the crest of the hill.”

Snow rarely falls in Rome, but the flakes fell silently during that night, blanketing the peak of the historic hill. In the morning the news quickly spread and crowds gathered to throng up the hill and behold the white splendor. The snow had fallen in a particular pattern, showing the outline of the future church. When it became known that the snow was a sign from Mary, the people spontaneously added another to her long list of titles, Our Lady of the Snows.

The doctrine of Theotokos, Mary as the Mother of God, was defined dogmatically at the Council of Ephesus in 431. Pope Sixtus III (432-440) erected a basilica at Rome on the Esquiline Hill in honour of the Mother of God which later became know as St Mary Major, the oldest church in the west dedicated to the Blessed Virgin.
Posted by Louis at 22:56 1 comments