Tonight's Low Mass at West Bromwich will be for the local feast of St Hugh of Lincoln. For more about this Saint, see the Catholic encyclopaedia entry. It is observed on this day in the Traditional Calendar in Nottingham, Westminster, Birmingham, Clifton and Northampton.

Newman on the Mass 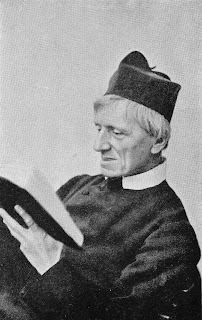 Many people look at the Latin Mass and think it absolutely pointless and unintelligible. A common criticism of the Mass pre-Vatican II was that it was rushed and garbled. I must say that because the Latin Mass is only said nowadays by Priests who love and cherish it, there is undoubtedly greater care taken in observing the Rite. Perhaps previous abuses were part of the problem resulting in wholesale reform?

However, Blessed John Henry Newman provides his own enthusiastic analysis of this criticism in his work of fiction Loss and Gain. When asked by his sceptical Protestant friend, in a final attempt at dismissing Romanism, how he could justify the garbled Mass, when it was said in a manner which ignored the presence or even understanding of the congregation, the zealous Catholic answers:

"...it will be faith which will enable you to bear the ways and usages of Catholics, which else might perhaps startle you. Else, the habits of years, the associations in your mind of a certain outward behaviour with real inward acts of devotion, might embarrass you, when you had to conform yourself to other habits, and to create for yourself other associations...

"to me nothing is so consoling, so piercing, so thrilling, so overcoming, as the Mass, said as it is among us. I could attend Masses for ever, and not be tired. It is not a mere form of words,—it is a great action, the greatest action that can be on earth. It is, not the invocation merely, but, if I dare use the word, the evocation of the Eternal. He becomes present on the altar in flesh and blood, before whom angels bow and devils tremble. This is that awful event which is the scope, and is the interpretation, of every part of the solemnity. Words are necessary, but as means, not as ends; they are not mere addresses to the throne of grace, they are instruments of what is far higher, of consecration, of sacrifice. They hurry on as if impatient to fulfil their mission. Quickly they go, the whole is quick; for they are all parts of one integral action. Quickly they go; for they are awful words of sacrifice, they are a work too great to delay upon; as when it was said in the beginning, 'What thou doest, do quickly.' Quickly they pass; for the Lord Jesus goes with them, as He passed along the lake in the days of His flesh, quickly calling first one and then another. Quickly they pass; because as the lightning which shineth from one part of the heaven unto the other, so is the coming of the Son of Man. Quickly they pass; for they are as the words of Moses, when the Lord came down in the cloud, calling on the Name of the Lord as He passed by, 'The Lord, the Lord God, merciful and gracious, long-suffering, and abundant in goodness and truth.' And as Moses on the mountain, so we too 'make haste and bow our heads to the earth, and adore.' So we, all around, each in his place, look out for the great Advent, 'waiting for the moving of the water.' Each in his place, with his own heart, with his own wants, with his own thoughts, with his own intention, with his own prayers, separate but concordant, watching what is going on, watching its progress, uniting in its consummation;—not painfully and hopelessly following a hard form of prayer from beginning to end, but, like a concert of musical instruments, each different, but concurring in a sweet harmony, we take our part with God's priest, supporting him, yet guided by him. There are little children there, and old men, and simple labourers, and students in seminaries, priests preparing for Mass, priests making their thanksgiving; there are innocent maidens, and there are penitent sinners; but out of these many minds rises one eucharistic hymn, and the great Action is the measure and the scope of it... And you ask me whether this is not a formal, unreasonable service—it is wonderful! Quite wonderful. When will these dear, good people be enlightened? O Sapientia, fortiter suaviterque disponens omnia, O Adonai, O Clavis David et Exspectatio gentium, veni ad salvandum nos, Domine Deus noster." 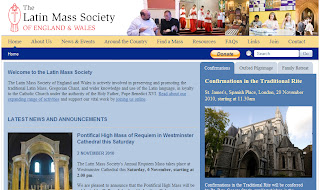 The Latin Mass Society Head Office have overhauled their website which can be found at the memorable address of www.lms.org.uk. It features an improved interactive map of all the Latin Masses in the country, so that wherever you may be you can see at a glance where the nearest one is. As well as all the usual features and resources, there is lots to explore, with updated photo galleries linked into the new Flickr environment.

There are exciting new links to umbrella organisations; the Gregorian Chant Network and the Society of St Tarcisius, which is a new Sodality of Altar Servers trained exclusively in the Extraordinary Form.
Posted by Unknown at 21:15 0 comments

It has been a continuing steady trickle of Masses in the region; our monthly Low Masses at West Heath and West Bromwich continue. In early July the feast of St John Fisher & Thomas More was celebrated with a High Mass at St John Fisher Church in West Heath for the second year running. This year Fr George Grynowski, Parish Priest, was accompanied by Fr Christopher Miller and Fr Jan Nowotnik.
The excellent choir ensemble 1685, sung Jean Richafort’s setting for our annual High Requiem at St John Fisher, West Heath on Friday 5 November. For the rest of November Fr George will have a weekly Friday Low Mass at 7.00pm.
On 17 July the Franciscan Friars of the Immaculate decided upon an Extraordinary Form Missa Cantata for their ‘Day with Mary’ at the Birmingham Oratory which meant a packed Church with lots of people new to the Traditional Mass. Also at the Oratory, the usual Saturday Low Mass has been postponed in recent months due to refurbishment of St Philip’s Chapel. Now the work is complete. The Holy Father was the first to pray in the new Shrine to Blessed John Henry Newman, where there is an Extraordinary Form Mass said every Saturday at 9.30am.
On Saturday 2 October we had our first Chant and Server training event culminating in a Missa Cantata for the Holy Angels at West Bromwich. About twenty-five people participated, with a congregation of about fifty at the Mass.
Posted by Unknown at 21:05 0 comments

High Masses being sufficiently rare is perhaps the reason I still have a sense of Euphoria after last night's Solemn High Requiem. But I like to think that it is something particularly special and powerful about the Rite itself, and how it was conducted on this occasion.

Once again ensemble 1685 offered to sing Richafort's polyphonic Requiem, as well as Chant the Graduale, Tractus, Dies Iræ, Libera Me and In Paradisum. The Propers of the Mass were from the Daily Mass for the Dead with prayers for deceased Brethren, relatives and Benefactors. The Mass was said at St John Fisher in West Heath, a church built in, and designed for the liturgy of, 1962. The Parish Priest Fr George Grynowski was Celebrant, with fellow South Birmingham Priests Frs Christopher Miller & Jan Nowotnik as Deacon and Subdeacon. Three other Priests from Birmingham were also present, with one sitting in choir.
After some intensive study and attending the Society of St Tarcissius Master Class, I was able to MC the Mass. This in itself is a great honour for me, commonly being the role of a cleric, and something I never imagined I'd be able to do this time last year. God must have graced me with a certain composure which I otherwise wouldn't have had under such circumstances! By all accounts things went very well, especially as a Requiem has so many 'oddities' compared to a normal High Mass, to demonstrate a sombreness and austerity of mood.

For instance, the Acolytes don't carry torches at the Gospel; no-one receives a blessing; there is neither Gloria nor Creed; the Sacred Ministers omit the solita oscula or reverent kisses when handing the celebrants liturgical objects. The Subdeacon has a different role, and instead of using a humeral veil and holding the Paten throughout the Canon, he instead incenses the Sanctissimum at the consecration.
But the most noticeable difference at last night's Mass for the 80 people present was the presence of the Catafalque and the ceremony associated with it at the end of Mass. An empty coffin was borrowed from the local funeral parlour, and the faithful were able to place inside it petitions written on paper, for dearly beloved who have passed out of this life. It is common to have November dead lists in Catholic Parishes, at which time we pray for the faithful departed. What better way to incorporate this into an 'All Souls' type Mass than to combine it with the Traditional ceremonial of the Catafalque, which takes the place of a body. The coffin was draped with a beautiful Pall commissioned by AWN Pugin, which is on loan from the recently closed Parish at Cotton.
It requires great pastoral sensitivity to introduce customs such as this into a Catholic world which no longer has any knowledge of them. For me it was a beautiful fruitful expression of grief and prayer, which no doubt stirs us to greater love and sacrifice for the Holy Souls in Purgatory who are destined for an eternity with the Creator, Redeemer and Sustainer of the World. Requiéscant in Pace. Amen.
Published by Blogpress for my iPhone
Posted by Unknown at 10:27 1 comments

This Friday, November 5th 2010 at 7pm, we will have our annual Requiem for deceased Priests, Relatives and Benefactors. This year it will be at St John Fisher, in West Heath. ensemble 1685 will once again sing Richafort's Polyphonic Requiem. Please come and donate generously to the upkeep of this fabulous modern Church designed for the Traditional Liturgy, and undergoing extensive repairs at present.

P.S. Is anyone with a camera available to take photos?
Annual Solemn High Requiem Booklet