This Friday at West Heath, the Mass at 7pm will be for the Feast of St Pius X (seen on the left celebrating Mass in the Sistine Chapel):


Joseph Sarto was born at Riese in Venetia on June 2, 1835. He was successively curate, parish priest, bishop of Mantua, patriarch of Venice. He was elected Pope on August 4, 1903. As chief pastor of the Church he realised to the full the value of the liturgy as the prayer of the Church and spared no effort to propagate the practice of frequent and daily Communion. In his encyclical Pascedi Dominici Gregis, he exposed and condemned the modernist heresy with force and clarity (1907). He died on August 20, 1914, and was canonized on May 29, 1954 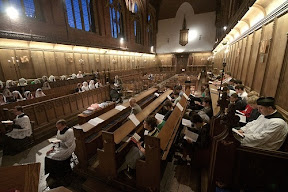 The St Catherine's Trust for Traditional Catholic Education held its sixth Annual Summer School from Sunday 1 to Sunday 8 August at Ardingly College in West Sussex. It was attended by forty enthusiastic students aged from 11 to 18, and a volunteer staff of sixteen, including a chaplain, Fr Andrew Southwell.

The students studied a range of subjects covering every aspect of Catholic belief, history and culture, and heard a piano recital by the professional pianist Matthew Schellhorn, and a talk from the Catholic journalist Dominic Scarborough.

There was daily Sung Mass in the Extraordinary Form, including Mass in Arundel Cathedral, by permission of Bishop Kieran Conry.

As part of the Summer School, the Latin Mass Society held its first ever residential Latin course, directed by Philip Goddard, the LMS's adviser on Latin, which made use of the LMS's teach yourself Latin primer, Simplicissimus. The course was based on the Latin of the liturgy, and examples and exercises were taken from liturgical texts. Students were divided into 'beginners' and 'intermediates', although all joined together for lectures on psalmody and liturgical poetry, the history of liturgical texts, and Latin in Philosophy. Students were delighted with the amount of Latin they were able to absorb, describing the course as 'transforming’ and ‘enriching' their engagement with the liturgy of the Church.

Doctor Joseph Shaw, Chairman of the LMS, said: “The Summer School is always exhausting but exhilarating; it is inspiring to see so many children being so prayerful. This is surely what Pope Benedict wants as part of the re-evangelisation of Europe”.

The St Catherine’s Trust Summer School is financially supported by the Latin Mass Society and other benefactors, and accepts students regardless of their ability to pay. Next year it will be held in Ushaw College in Co. Durham, from Sunday 23 July to Saturday 30 July: see www.stcatherinestrust.org for more details.

I seem to have made all sorts of mistakes in my last newsletter! I upset the Provost of the Birmingham Oratory, who would like to clarify that Fr Philip and any other Oratorians have not been exiled. The word 'exiled' is "untrue, unkind and unhelpful".

Therefore I would like to go on record as saying a more appropriate phrase would be "gone on holiday" in which case please pray that they're having a jolly time.

When I have time I will amend the online newsletter, but it has already been sent out so therefore the 'damage' must have already been done and I hope this clarification will act some way to make amends for such a slur on the Congregation's intentions.

The celebrant will be Fr Aidan Nicholls OP and it will be followed by drinks at the Plough & Harrow for Francis Burke's 60th Birthday party.

I hope you can make it. God bless!

News from the Dioceses
(Birmingham & Black Country)
Mass of Ages Magazine
August 2010
The monthly Low Masses at West Heath and West Bromwich continue, although numbers have been down in the last couple of months. I urge anyone who can to attend.
Unfortunately our Midlands Chaplain, Fr Philip Cleevely, is on extended retreat. Father George Grynowski and Fr Chris Handforth are kindly covering his absence at West Bromwich. It is the first time in seventeen years that Fr Chris has celebrated the EF Mass, and we are very grateful to him! 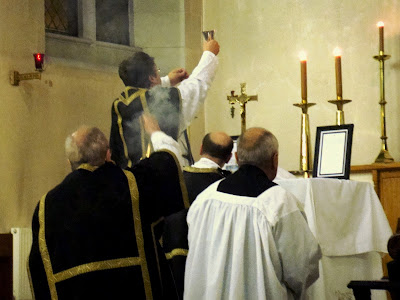 1) Gregorian Chant Schola
We will establish a new Gregorian Chant initiative for the region. Anyone who is interested is welcome, be it newcomers or those more proficient in Chant. The main objective will be to meet perhaps every other month in different Parishes around the region. With the encouragement of the Gregorian Chant Network, it will group together like-minded individuals to hopefully form a schola to aid more sung Masses in the region.

2) Servers Training
Anyone wishing to learn to serve at a Sung Mass are encouraged to come to this training event. If you’d like to learn the Low Mass, please get in touch to arrange an opportunity. Affiliated with the Society of St Tarcisius, which I can provide further information about. 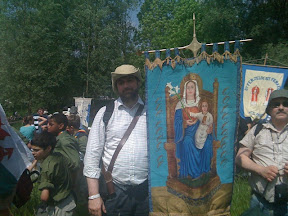 The LMS pilgrims will leave Ely on Friday 20 August after a 7.00 am blessing in Ely Cathedral. Accommodation will be in tents. There will be daily Mass in the Traditional Latin Rite concluding with a Traditional Mass in the Chapel of Reconciliation at Walsingham at 2.30 pm on Sunday 22 August. This will be open to all.

The pilgrimage will be restricted to adults for this year whilst any practical problems are ironed out. It is hoped it will be much larger next year.

Dr Joseph Shaw, LMS Chairman, said: “I am very excited by this pilgrimage – it’s the sort of practical and challenging devotion which young people in particular find of great benefit. This is just one of the evangelical activities by which the LMS is responding to Pope Benedict’s call for a fresh presentation of the Faith in Europe”.

For registration and full details potential pilgrims should e mail the organiser, Paul Smeaton, on paulsmeaton@hotmail.co.uk or telephone the LMS office on 020 7404 7284.

Picture: Dr Joseph Shaw, LMS Chairman, with a banner of Our Lady of Walsingham on the Paris to Chartres Walking Pilgrimage, May 2010.