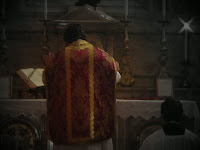 The Novus Ordo missal no longer has a special octave of Masses for Pentecost. Therefore the Birmingham Oratory fathers are offering daily old Rite Low Mass at 8:30am next week in St Philip's Chapel. On Saturday it will be at 9:30am as normal.
Posted by Unknown at 20:34 0 comments 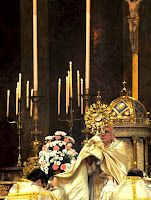 Here are some images from the Solemn Vespers which took place at the Birmingham Oratory on Monday night for the feast of St Philip Neri. Vespers are a regular feature of community worship at the Oratory, taking place every Sunday night at 7.30pm. In terms of those attached to the 1962 liturgical books, they follow the traditional ordinary although change the collect and magnificat antiphons depending on what is going on in the new calender. Enjoy! 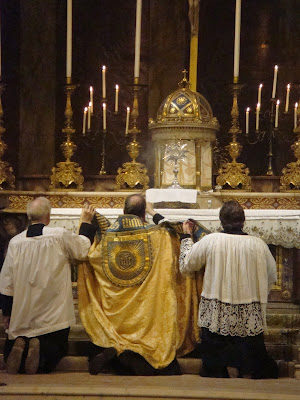 More photos from today's May Procession at the Birmingham Oratory here.
Posted by Unknown at 21:36 0 comments

During the weekend of the 18-20 September 2009. Young Catholic Adults (YCA are part of the international Juventutem Federation) will be running a Traditional Retreat at Douai Abbey in the south of England, the weekend will be led by Juventutem Ecclesiastical Assistant Fr de Malleray. Summorum Pontificum must be working - at least in a "brick by brick" fashion, just look at the following:-

-For the first time YCA will be organising a Missa Cantata, sung by the Douai Singers; this will be followed by a Marian Procession

- YCA has booked out the whole of the retreat complex this year, on the advice of Douai Abbey itself, as the monks were so pleased with the YCA retreat last year

The cost of the weekend will be from as little as 25 pounds for students (or 48-88 pounds for non students) for more details, please see http://www.youngcatholicadults.co.uk/news.htm or email juventutemcatholicam@yahoo.co.uk or ring 07908 105787.

Events Open to the Public

The Sung Mass (Missa Canta) on Saturday 19th September 09’ at 10am followed by a Marian Procession around the extensive grounds of the Abbey at 11am (starting from the main Abbey Church) are open to the public.

There are also a few rooms allocated for all age groups (not just YCA) so please book soon.

There are limited places so please reserve your place early! VIRI Galiǽi, quid admirámini aspiciéntes in cælum? allelúia: quemádmodum vidístis eum ascendéntem in cælum, ita véniet, allelúia, allelúia, allelúia.
YE men of Galilee, why wonder you, looking up to heaven? alleluia. He shall so come as you have seen Him going up into heaven, alleluia, alleluia, alleluia.
Here is the perfect opportunity to observe this important feast of Our Lord on the day it is properly intended. Tailored Mass books and full translations are provided, which will make it perfect for newcomers to the Traditional Latin Mass. 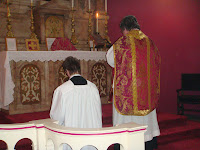 Also: there will invariably be Low Mass every Saturday at 9:30am in St Philip's Chapel (adjacent to the Sacristy, entrance next to the Sacred Heart Altar). Adoration happens in the main church every Saturday morning 8.30-10.45, ending with Benediction. So this little Mass is an excellent way to extend this devotion. Please check with me (07967 729168) before travelling, to avoid disappointment, the night before!

Of course, the Sunday Low Mass at 9.30am continues, with new tailored Mass booklets available soon, along with a propers sheet every week.

View Map
I hope to expand the Latin Mass a bit further afield from Birmingham Oratory, which may take some time. In the meantime, it has been suggested we have pilgrimages, and I think a good idea would be one to Harvington Hall for the feast of St John Wall when there will be a Missa Cantata. This will probably be the first Sunday in September, which is a long way away. Please let me know any other suggestions.
Posted by Unknown at 11:15 0 comments

PRESS RELEASE FROM THE LATIN MASS SOCIETY
For Immediate Release
GREAT SUCCESS! TRADITONAL LATIN MASS RETURNS TO THE HEART OF THE CHURCH
The Latin Mass Society’s (LMS) residential training conference for priests wishing to learn the Extraordinary Form of the Roman Rite (Traditional Latin Mass) held at Ushaw College, Durham from Monday 20 April to Thursday 23 April (Low Week) has been a great success.

Twenty priests, mostly from the northern English dioceses, received intensive training in the celebration of Mass in the Usus Antiquior or Extraordinary Form.

Tuition was given in small groups by priests who regularly offer Mass in the Traditional Latin Rite. Four of the groups were for beginners or near-beginners and concentrated on Low Mass. The other two groups were for priests already proficient in Low Mass and who wished to study the more complicated forms of Missa Cantata or Solemn Mass.

The conference participants felt thoroughly welcomed at Ushaw College, one of England’s most prestigious seminaries. Particularly useful was the availability of many side altars suitable for practice and private Masses. The conference made use of no less than ten of these.

The magnificent St Cuthbert’s Chapel was used for all the public services. These included Lauds, Vespers, Compline, Rosary and Benediction as well as the daily conference Mass. The plainsong chant was provided by the schola of the Rudgate Singers; and at the final Solemn Mass the polyphonic choir, Antiphon, sang Byrd’s Mass for Four Voices.

As a seminary chapel with plenty of choir stalls, St Cuthbert’s Chapel was ideally suited for a gathering which included so many priests. The impressive gothic architecture, cathedral-like accoustic and traditionally styled sanctuary made a perfect setting for the Latin liturgies.

The Holy Father in his Motu Proprio, Summorum Pontificum not only ‘released’ the Mass but also the other sacraments and Father Thomas Crean OP, who includes part-time hospital chaplaincy amongst his duties, gave a well-received lecture on the pastoral relevance of the Traditional Rite of Holy Unction, Viaticum and Commendation of the Dying.

Canon Stephen Shield, Dean of St Peter’s Cathedral, Lancaster, who celebrated some of the conference liturgies, gave the keynote address at the convivial Gala Dinner at which the priests lustily sang ‘God Bless Our Pope’.

One of the priest participants said afterwards, “It rejoiced our hearts to hear the Gothic splendours of the Pugin chapel of St Cuthbert ringing once more to the sound of plainsong and the Mass of Ages. It is to be hoped that more clergy will rekindle joy in the priesthood through discovering the riches of our Catholic heritage.”

Doctor Joseph Shaw, LMS Chairman, said, “The glorious sight of the great chapel with Solemn Mass, two choirs, more than a score of priests in choir, and a good number of local faithful, was surpassed by the bustle of the enormous sacristy and the whisper of private Masses at innumerable altars in the early morning. What the LMS conference represented is the re-establishment of the Traditional Mass as part of the tool-kit of parish priests. It was wonderful to see Ushaw College doing what it has done for two centuries: enabling the training of priests in the Church’s great liturgical tradition”.

The training conference at Ushaw College is the third the LMS has organised. Two very successful conferences were held at Merton College, Oxford, in 2007/8, attended by over 95 priests. However, the LMS wanted to move its conferences to unambiguously Catholic surroundings and Ushaw College was an obvious choice.

The LMS is organising a further training conference for priests at All Saints’ Pastoral Centre, London Colney, St Albans, Herts (the Archdiocese of Westminster’s premier conference centre) from Monday 24 to Friday 28 August. Details are available from the LMS office.