High Mass for the Feast of the Chair of St Peter 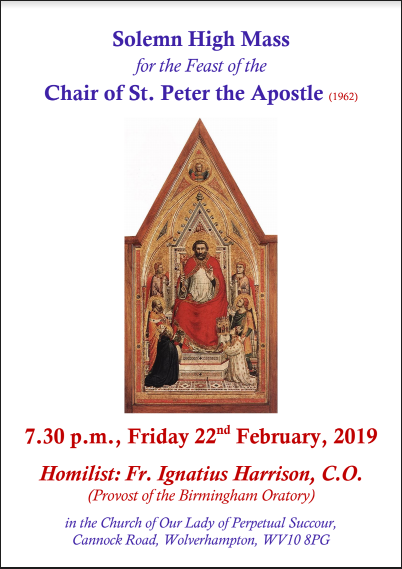 It was announced this week that Pope Francis has authorised the promulgation of a decree confirming a miracle through the intercession of Blessed John Henry Cardinal Newman, the founder of the English Congregation of Oratories, paving the way for his canonisation. By coincidence, the Provost of the Birmingham Oratory is preaching at the High Mass at Our Lady of Perpetual Succour this Friday in Wolverhampton for the Feast of the Chair of St Peter. The poster included in this blogpost above gives further details.

There are also some additional Masses at St Mary-on-the-Hill in Wednesbury this week as detailed below:

Please note there is no Mass this Wednesday at Our Lady and St Kenelm in Halesowen.