I have managed to produce a DVD of the Solemn High Requiem Mass at West Bromwich, and it is almost available if you want a copy. I would be happy to take orders for this, which is at a cost price of £5 with the generous permission of ensemble 1685 who own the copyright to the singing (the high renaissance polyphonic setting Requiem in Memoriam Josquin Desprez written by Jean Richafort, with plainchant).
The DVD is professionally presented in a printed box containing a full translation booklet which is chapter indexed. Also on the DVD is a short 6-minute promotional edit which gives a great feel for the sights and sounds of the Traditional Latin Mass (see below). Lastly on the DVD I have included a short slideshow of photographs taken of the Mass.
Please note this DVD will not be available from anywhere else. 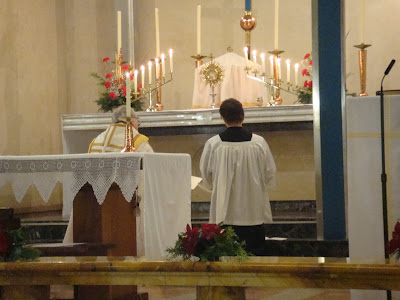 We celebrated the first day of the new year, and the Octave of Christmas, in West Heath as part of the regular First Friday Mass in the Extraordinary form at 7pm. Fr George Grynowski offered Benediction with the Litany of the Holy Name, and preached about the importance of offering sacrifices for blasphemy against the holy name of Jesus, which is so prevalent. I hasten to agree, even in my own slip of the tongue.

Tonight was probably the poorest I have ever served Mass! I thought I had cracked Low Mass but I was indeed greatly humbled. Part of serving Mass should be about being 'invisible' and enabling the Priest more easily to keep his mind on the great sacrifice being offered, without becoming a pest or a distraction. I think I was both!

My best wishes for 2010 and I hope to meet more of you soon.