The Oratory has released its music list for February including Ash Wednesday at the end of the month. Please note that as Candlemas falls on Sunday, the High Mass will start at the slightly earlier time of 10.15 to accommodate the blessing of candles. There will also be a low Mass at St Mary-on-the-Hill at 11.30am. Directions to both these churches are available in the sidebar. 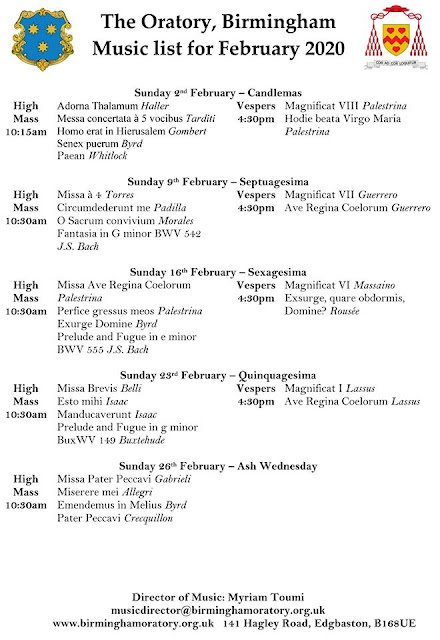 Members of the LMS in the region will be aware, via the Birmingham & Black Country LMS newsletter, that I announced before Christmas that Fr Bruce Dutson would be retiring as Parish Priest of Our Lady & St Kenelm in January after twenty-two years service. His last Mass was actually on Sunday with the last Latin Mass at the church taking place last Wednesday.

The weekly noon Latin Mass at Our Lady & St Kenelm in Halesowen was one of my favourite Masses, although I was unable to make it often as it usually clashed with work. I believe it was the oldest continuous Latin Mass in the West Midlands, predating even the Masses at the Birmingham Oratory which were originally transferred from St Catherine's Church on the Bristol Road. The Masses took place in the Lady Chapel, which provided a very intimate setting with a small but devoted local congregation, sometimes attracting seminarians from Oscott before the daily Mass at the Oratory became another option on Wednesdays. Due to Fr Bruce's commitments, the Masses sometimes had to be cancelled or moved to 9am in the morning so it was always a good idea to ring in advance or, more lately, check the website before travelling. At its peak, there were a group of five men who organised the rota for serving.

Fr Paul Lester may occasionally offer more Masses on Wednesday at St Mary-on-the-Hill in Wednesbury, which along with the daily 5.45pm Mass at the Oratory and the Maryvale Mass on second Wednesdays at 7pm will be potential alternatives, although the latter continues only due to the continued dedication of the former parish priest Fr Eamonn, who continues to travel up to celebrate it.  With the end of the Mass at Our Lady and St Kenelm, no Latin Masses are currently celebrated in the Dudley deanery

The parish have a tribute to Fr Bruce on the website here. Please pray for Fr Bruce Dutson and the parish as they both adjust to their new situations.
Posted by Birmingham & Black Country LMS at 17:45 0 comments

There are three regional opportunities to celebrate the Epiphany in the Extraordinary Form:

There is also a High Mass for Friday after the Epiphany at Our Lady of Perpetual Succour in Wolverhampton at 7,30pm. This replaces the usual 6.30pm Low Mass.

Directions for all of these churches are available in the sidebar.

Below is the January Music List for the Birmingham Oratory. 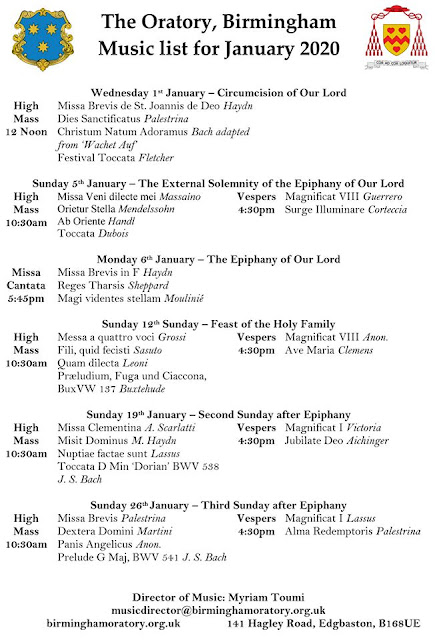