As usual, there will be High Mass at the Oratory for All Saints (7.30pm 1st November) and All Souls (11am 2nd November) replacing the usual 5.45pm/ 9am low Masses respectively. The Oratory has released the music list these two Masses as well as all other Masses taking place in November; these are detailed in the graphic below: 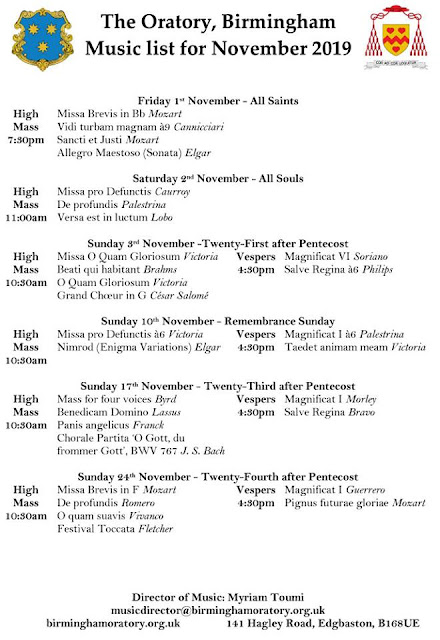 In addition to the Masses at the Oratory, the holy day of obligation of All Saints can be satisfied with the usual First Friday Mass at Our Lady of Mount Carmel in Redditch (6pm) and Our Lady of Perpetual Succour in Wolverhampton (6.30pm), which will both be taking place. The first Friday Mass at Sacred Heart and All Souls in Acocks Green has however been postponed to the 8th November 2019.

There is also an additional 12 noon Mass at St Mary on the Hill in Wednesbury for All Saints, and one at 11am on Saturday for All Souls.
There will also be a High Mass at Our Lady of Perpetual Succour in Wolverhampton at 12 noon for All Souls.
Posted by Birmingham & Black Country LMS at 15:41 0 comments 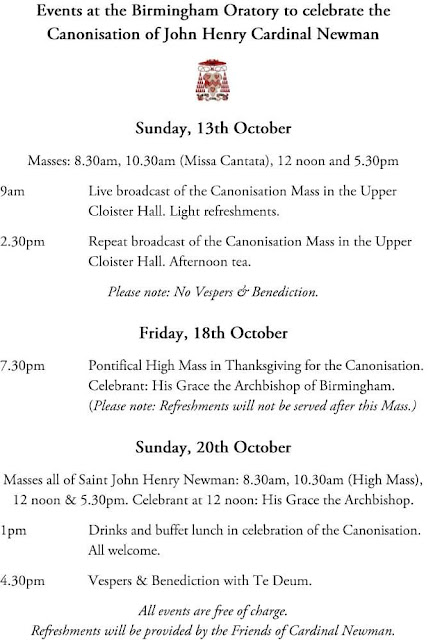 Just a reminder that on Friday, Archbishop Bernard Longley will celebrate Pontifical High Mass at the Birmingham Oratory following St John Henry Newman's canonization in Rome over the weekend. The Mass is at 7.30pm, which may be later than previously advertised (at the time the Autumn edition of Mass of Ages was printed the time was 7pm). I don't believe the usual 5.45pm low Mass will be taking place on the day but have not been able to confirm this.

Please also note that the usual third Friday Mass at St Dunstan's will not be taking place and lifts will be offered to the Oratory for this special occasion instead. Please do your best to attend to thank the Archbishop for his interest in administering to the traditional Catholic community and also to show the strength of numbers there are in the traditional Catholic movement.
Posted by Birmingham & Black Country LMS at 22:10 0 comments

The Feast of St Wilfred at Lichfield

With all the excitement of the Newman canonization on Sunday, I have forgotten to advertise an extra Mass at 10 am tomorrow (12th October) at Holy Cross, Upper Saint John Street in the centre of Lichfield for the Diocesan feast of St Wilfred.
Posted by Birmingham & Black Country LMS at 15:39 0 comments

Blessed John Henry Cardinal Newman will be canonised by Pope Francis in a ceremony in Rome on Sunday. It goes without saying that many of the community of the Oratory of St Philip Neri in Birmingham, which was founded by Newman himself, will be in Rome to witness the first Englishman canonistion since the Forty Maryrs' by Pope Paul VI in 1970. The following events will take place to celebrate Blessed John Henry Newman's canonisation: 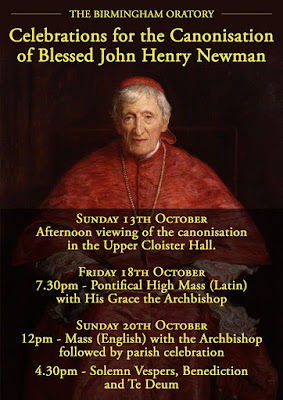 The 10.30am Mass at the Birmingham Oratory on 13th October will be a Missa Cantata and not a High Mass. The canonisation will be shown live and repeated at 2.30pm in the Upper Cloister Hall. There will be no Vespers and Benediction on this date, but Solemn Vespers, Benediction and Te Deum will be said a week later at the usual time of 4.30pm on 20th October at the Birmingham Oratory.

Most importantly, Archbishop Bernard Longley will celebrate his third Pontifical High Mass at the Birmingham Oratory on Friday 18th October at 7.30pm. Please do your best to attend one or all of these events being held to celebrate the canonisation of Cardinal Newman.