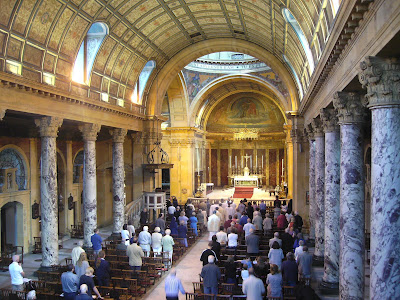 Above: Entrance Processional taken by Oliver Hayes of the Oratory Choir

The High Mass this morning for the Assumption of the Blessed Virgin Mary was very well attended. There were probably about 100 people in the congregation, which is a similar number to the High Mass on a Sunday (Ordinary Form). Palestina's Assumpta Est Maria was sung by the Oratory Choir to great effect. Everyone joined in with Credo III. I served as second Acolyte, but we seemed to be a bit short on servers and so sadly we had no torch bearers. Fr Guy Nichols was Celebrant and Preacher, Fr Anton Guziel was Deacon, and Fr Paul Chavasse was Subdeacon. There was another Oratorian and visiting Deacon in choir.

The fixed date of this feast on August 15th follows an ancient tradition which is also followed in the Eastern and Oriental Orthodox Churches - the feast of the Dormition of the Theotokos. Dormition means 'falling asleep' and Tradition tells us that Our Lady fell asleep and was then taken, body and soul, into heaven. Orthodox Christians believe this in a different sense to Catholics, in that they hold to the legend that Our Lady died a natural death, although she was made aware of this by the Archangel Gabriel three days in advance. Then the Apostles, who were scattered throughout the world, were miraculously all together to be present for her death. She was then buried in Gethsemane, and Thomas, appearing three days late, asked to see the tomb. Upon arriving, her body was gone with only a sweet fragrance in its place. Then an apparition informed them that Christ had taken her body into heaven, but not to be united to her soul (presumably until judgement day).

Catholics have slightly different beliefs, along similar lines to the Prophet Elijah, and perhaps even Moses. We believe that our Lady did not die in the proper sense, and was taken body and soul into heaven. This is why in the Christian Church there are no relics or tomb or burial place marked for the Blessed Virgin Mary. Pope Pius XII declared the Assumption to be Catholic Dogma in 1950, but left open the question as to whether she had died an earthly death beforehand.

The Feast gives us a special vision of how our own lives are transformed by God's Grace, and the promise of resurrection of the Last Day:

No man can come to me, except the Father, who hath sent me, draw him; and I will raise him up in the last day... I am the living bread which came down from heaven. If any man eat of this bread, he shall live for ever; and the bread that I will give, is my flesh, for the life of the world.