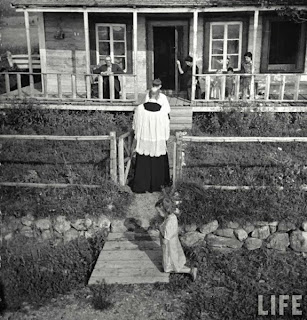 The above is a photo I came across via Twitter, from a 1942 LIFE magazine, showing a priest taking Holy Communion to the sick. He is being led by an altar boy carrying a candle; a sight we are unlikely to see nowadays. H/T The Deacons Bench.

Another post I came across via Twitter was an article entitled Why I'm Not a Traditionalist (But We're Going to Latin Mass Anyways...). I offer it here merely as a prompt for discussion. It strikes me that as we end the month where we celebrated the sixth anniversary of Summorum Pontificum, and with the ongoing and neverending discussions about the liturgical tastes of Pope Francis, one of the things we seem to have lost is how Pope Benedict's Motu Proprio on the Latin Mass introduced the EF to a generation who would never have experienced it otherwise and would not necessarily describe themselves as "Traditionalists". I know people influenced by the charismatic movements who are increasingly becoming liturgically more "traditional" when it comes to the Mass, often as a result of an opportunity to experience the Extraordinary Form made possible by Summorum Pontificum over the last few years. A Pope may lead by example indeed, but are we underestimating the impact of more local efforts to improve the liturgy?

Don't sit on the sidelines and moan - do your bit and join the Latin Mass Society today.
Posted by Louis at 23:05 0 comments

Pictures from Exaltation of the Holy Cross 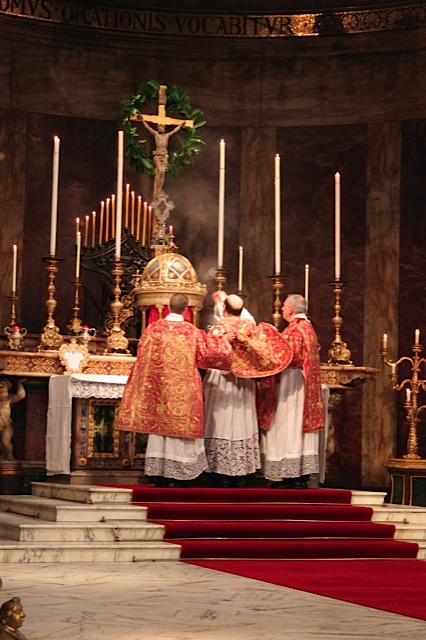 More available at the following link:

High Mass for the Exaltation of the Holy Cross

On Saturday, the Oratory will be having a High Mass at 12 noon for the Feast of the Exaltation of the Holy Cross, followed by a procession and veneration of the Relic of the True Cross. This is of course the sixth anniversary of Summorum Pontificum and so is an excellent opportunity to give thanks for the document which makes so much of the work of the LMS possible. Please note that the 12 noon Mass replaces the Saturday Low Mass at 9.30am.

Saturday also coincides with the Day of Reconciliation: Archbishop Bernard Longley has requested that every parish make confession available between 11am and 12 noon this Saturday so that people can rediscover the beauty of this wonderful sacrament. Interestingly, recent reports suggest that there has been a boom in confessions since the election of Pope Francis. The Oratory will be providing an opportunity for confession between 10am and 12 noon, and 2.30pm to 5.30pm.
Posted by Louis at 00:12 0 comments

Last week Dr Joseph Shaw, Chairman of the Latin Mass Society, wrote a blogpost on a document recently released in German and Italian on the importance of priests celebrating Mass daily, even if that means it is celebrated without a congregation, sometimes known as 'private' Masses. The term 'private' Mass of course is no longer used as it is a bit of a misnomer: every Mass is in some sense an act of public celebration of the Church. Coincidentally, the excellent Chasubles and Chalices blog posted some photographs of private Masses that take place at the Birmingham Oratory, including the photograph included on this blogpost. Go to the blog to view the rest.

The Birmingham Oratory sometimes has a 'private' EF Mass on Saturday's at the Altar of Our Lady at around 8-8.30am if you are unable to make the more widely publicised 9.30am EF Mass, but please phone up to check it is on beforehand to avoid a wasted journey.
Posted by Louis at 22:38 0 comments

The Latin Mass Society’s annual walking pilgrimage to the National Shrine of Walsingham took place over August Bank Holiday weekend. The fourth consecutive year of this event saw 90 people (a 25% per cent rise on last year) undertaking the three-day journey on foot to ‘England’s Nazareth’. The intention of the 55-mile walk, which started in the cathedral city of Ely in Cambridgeshire, was the conversion of England. Pilgrims slept in tents or on the floors of school and village halls along the way and clearly many found it more challenging than they had expected, but all managed to reach the Shrine in time for Solemn Mass in the Extraordinary Form on the afternoon of Sunday, 25 August.

Four priests accompanied the pilgrimage. Fr Bede Rowe of Clifton Diocese, presently based at Chavagnes College in France, was chaplain of the pilgrimage. He was joined by Fr Thomas Crean, OP, of Holy Cross Priory, Leicester, Fr John Cahill of Northampton Diocese, and Fr Michael Rowe (no kin) from Australia. In addition, three English seminarians from the Fraternity of St Peter joined the event as well as member of the Dominican community at Blackfriars, Cambridge. Traditional Solemn Mass was celebrated every day of the pilgrimage, most notably at Oxburgh Hall in Norfolk, a fifteenth century moated manor house and former recusant home, still lived in by the Bedingfeld family.

LMS General Manager, Mike Lord, said: ‘By common consent, this has been the best year for this
pilgrimage so far. The overwhelming majority of walkers are young families and young people, showing the continuing vitality of the Traditional Mass and Faith. Many are encountering the Old Rite for the first time and have found the experience of the traditional spirituality of the Roman Rite and the spiritual and physical discipline of a walking pilgrimage an inspiring and transforming experience. Our entrance into Walsingham itself was memorable. On other public pilgrimages organised by the LMS, it is common to encounter hostility in the street, but as we approached the gates of the Abbey grounds to the former site of Lady Richeldis’s Holy House, the response of bystanders was very positive, even awed.’

The LMS plans to release a short film documentary in the early autumn about this year’s pilgrimage to inform and inspire others to join them for next year’s event.
Posted by Louis at 21:49 0 comments