All Saints and All Souls Masses

There are two Extraordinary Form Low Masses available in the Birmingham area for the Feast of All Saints: both the Oratory and St John Fisher in West Heath will be celebrating their usual Friday evening Masses which will satisfy the obligation to hear Mass on that day. The latter is a rare opportunity to attend an EF Mass on a Holyday of Obligation in a local parish church and may well attract some first timers - please be gentle with them so that they are encouraged to come back! St John Fisher does have some small missalettes to help those who attend follow the Mass, so if you have never been before I do encourage you to go.

For All Souls on Saturday, there will be an High Mass of Requiem at 11am in the Oratory to the setting by Maurice Durufle:


Please note, this replaces the regular 9.30am Low Mass. If you are unable to attend this Mass, a list of further further EF (and OF) Masses that will be said on All Souls day will be available from the Oratory later in the week (Update 31/10/2013 - there will be an EF Low Mass starting every half hour between 7.30am and 9.30am - please see Fr Richard's comment below on this article).
Posted by Louis at 10:49 1 comments 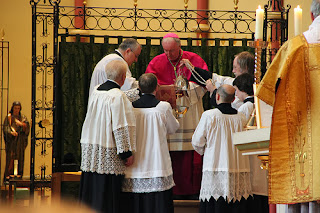 Rt Rev Philip Egan, Bishop of Portsmouth, presided from the throne at a High Mass in the Extraordinary Form, organised by the Latin Mass Society, at Portsmouth Cathedral on Sunday, 27th October.

The Traditional High Mass was the first at the cathedral for four years and joins the weekly Sunday morning Low Mass that has begun at Portsmouth’s mother church in recent weeks. Despite warnings of dire weather conditions, the Mass was well attended. 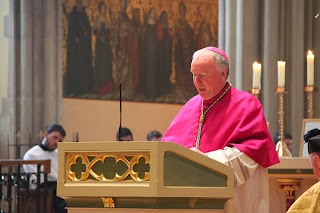 The celebrant was Fr Phillip Pennington Harris, and the deacon was Rev Stephen Morgan, both of Portsmouth Diocese. The sub-deacon was Fr John Maunder of the Ordinariate of Our Lady of Walsingham, based at St Agatha’s, Portsmouth. Music was provided by the Schola Gregoriana of Cambridge, directed by Christopher Hodkinson. 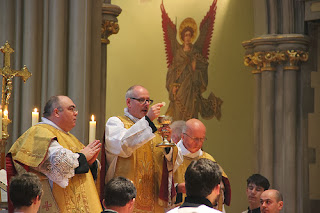 During his homily, Bishop Egan said that the Extraordinary Form of the Mass was welcome in Portsmouth Diocese where people wished it to be celebrated, and should have a place amongst the liturgical diversity of the diocese. He also highlighted the importance to the Church’s liturgy in both forms of the Roman Rite of Gregorian Chant and the Latin language. The bishop then spoke on the subject of the feast of Christ the King, celebrated on that Sunday in the 1962 Calendar. When Pope Pius XI had instituted it, it had been intended as a corrective to the rampant nationalism seen in inter-war Italy. Today, said the bishop, it still has great relevance as a corrective to the rise of secularism in our society. 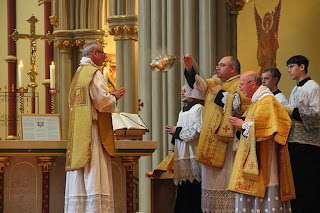 After Mass, tea had been organised by the LMS in the cathedral centre and Bishop Egan stayed to talk with very many members of the congregation.

LMS General Manager, Mike Lord, said: ‘We were delighted that Bishop Egan was able to join us on this great occasion and were heartened by his words of welcome to those of us who are attached to the Traditional Latin liturgy and by the bishop’s affirmation of its legitimate place within the life of the Catholic Church. The annual High Mass at Portsmouth Cathedral has been revived after several years and today’s event has proved a great success and a very joyful occasion for all who attended.’
Posted by Louis at 14:30 0 comments

Review of the ICKSP Retreat at Pantasaph

Last weekend I was lucky to take part in a retreat on the Theology and Spirtuality of the Traditional Mass, run by the ICKSP at the Franciscan Retreat Centre in Pantasaph, the usual venue of the LMS Latin Course and Summer School. Amongst the usual retreat fare of Mass, adoration, rosary and confessions (I think this was the first time I took part in a confession where I was absolved in Latin), there were five talks on mainly the theology of the Traditional Mass, but also on the spirituality of the Traditional Mass. There was a particularly good talk on the Saturday evening on the Sacred Heart of Jesus, which demonstrated that it is not merely a devotion that came about in the Middle Ages but was part of the tradition of the Church from the beginning and indeed has a basis in the Mass.

The symbolism of much of the Mass was explained such as the purpose of the all the signs of the cross the priest makes during the Canon. There was some very useful information on the symbolism of the Epistle, Gospel and Creed in the Mass, on how they are read and by whom: the Subdeacon reads the Epistle on the side representing the Jews, and then symbolically transfers the Gospels to the Deacon, representing the transferring of the covenant to the gentiles. The Deacon proclaims the Gospel to the North, the direction which the pagan dwell, and it is then passed back to the Subdeacon, representing the conversion of the Jewish people at the end of time. The Creed is then recited for the believers. This is all very pertinent information for those of us in Birmingham who have the rare opportunity of attending a weekly Solemn High Mass at the Oratory!

It is a pity more people were not able to benefit from this retreat - there were around ten people attending in total and we had three people from the Birmingham and Black Country region present. A write-up from the Wrexham LMS representative, who I had the pleasure of meeting at the retreat, is available here.
Posted by Louis at 11:26 0 comments 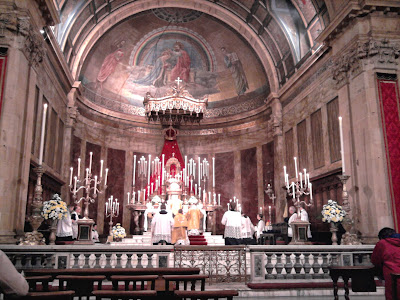 Above is a picture from the High Mass of Exposition at the Birmingham Oratory for the Forty Hours' Devotion that took place on Tuesday. I understand Fr Richard will be celebrating a Low Mass at the Martyrs altar in the Birmingham Oratory at 8am tomorrow (Thursday 17th October).
Posted by Louis at 22:00 0 comments

LMS General Manager Mike Lord  has produced another video, this time on the Walking Pilgrimage from Ely to Walsingham that took place in August:

If you are interested in getting away from it all with a traditional Catholic retreat, there are two options available this weekend. Firstly, there is a retreat on the Theology and Spirituality of the Traditional Mass run by the ICKSP at Pantasaph which I think may still have some places available. There is also a Young Catholic Adults National Weekend taking place at the Cold Ash Retreat Centre. Further details are available on the Young Catholic Adults events page.
Posted by Louis at 18:04 0 comments

High Mass of Exposition at the Birmingham Oratory

It is the Quarant' Ore devotion at the Birmingham Oratory this week, beginning with High Mass of Exposition in the Extraordinary Form at 7pm on Tuesday 15th October. It ends with Extraordinary Form Sung Vespers of the Blessed Sacrament (Mozart Vesperae Solennes de Confessore K 339) at 7pm on Thursday 16th October concluding with procession and Benediction. Of course, EF Sung Vespers and Benediction also happens every Sunday at the Oratory at 4.30pm before the 5.30pm Mass in English.

The full schedule is as follows:

Please note that all other Masses (at 7.30am and 12.30pm on Wednesday and Thursday) will be in English. If you do manage to spend some time in adoration before the Blessed Sacrament, could I please request that you keep the activities of the Birmingham and Black Country Latin Mass Society in your prayers.
Posted by Louis at 16:39 0 comments

There are several temporary changes to the Masses in October. Firstly, Fr George is away which means that the first Monday Mass in Redditch in neighbouring Worcestershire and the Friday Masses scheduled for the 11th and 18th October at West Heath have been cancelled. I was hoping to get some cover for the latter Masses, but unfortunately this was not possible. Alternative Friday provision is available at the Birmingham Oratory and Wolverhampton. The 18th also sees the beginning of the Retreat on the Theology and Spirituality of the Traditional Mass in Pantasaph, which may be an alternative if you are able to attend for the whole weekend.

Towards the end of the month there are also some amendments to the Masses at Halesowen: the Mass on the 23rd is cancelled, and the Mass on the 30th has been moved to 8am in the morning. I am now getting quarterly updates on the Halesowen Masses and will be updating the calendar in the sidebar with any changes of which I am aware. However, I would still recommend you ring up beforehand (telephone number 0121 602 1972) if you plan to attend because there can be some last minute changes and I myself was caught out earlier this year when I travelled to Halesowen for the noon Mass only to find out that it had been moved at the last minute to 8am. I took the opportunity to take the photo above.
Posted by Louis at 12:28 0 comments