November Devotions for the Dead at the Oratory 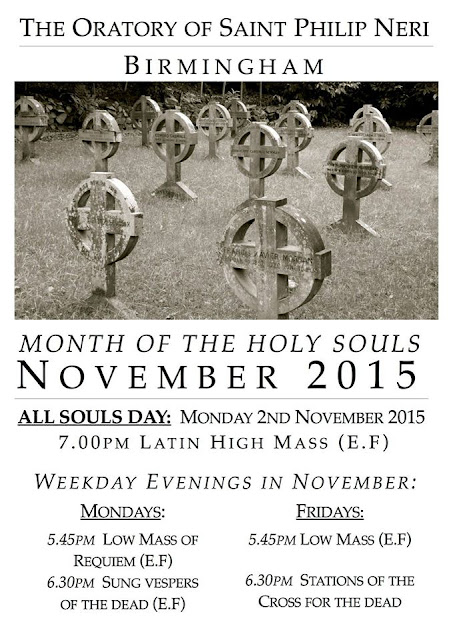 With all the excitement over the first High Mass at St Augustine's in over one hundred years, I forgot to mention the additional High Mass for All Souls Day at the Birmingham Oratory. There were also five low Masses held during the day at 8.00am, 8.30am, 9.00am, 9.30am and 5.45pm. The 5.45pm time is significant: the Friday Mass at the Oratory has moved to this time from 6pm - during November this will be followed by Stations of the Cross for the Dead - and there is an additional low Mass at this time every Monday during November followed by Sung Vespers of the Dead. However, the last Monday (30th) will be part of the Novena preceding the Immaculate conception where there will be a daily Mass at 5.45pm followed by Pontifical High Mass presided by oratorian Bishop Robert Byrne at 7pm on the Feast itself. I will post details closer to the time.