Melanie Bullivant has the following report:

It was the second annual Extraordinary Form Mass with the children and was preceded by an assembly in school the day before, during which Fr. George gave the children a short talk about the history of the Mass and explained the differences between the Ordinary and Extraordinary forms.

Today’s Low Mass included three commentaries, which the children read before the Offertory, before the Canon and after Holy Communion.

The Regina Caeli was sung after Mass, following a request from one of the children in the assembly. The children completed a written reflection about the Mass when they returned to school. The many positive comments included, “I liked that it was spoken in Latin, how it should be all the time”; “It is silent and more peaceful” and “It was quiet which gave me more time to pray”. One third of the children in Year 5 said they preferred Mass in the Extraordinary Form. 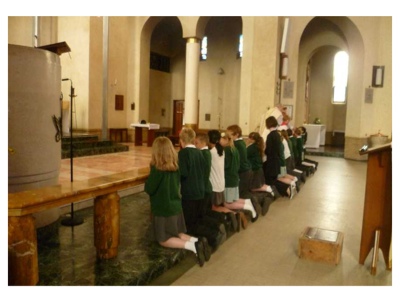