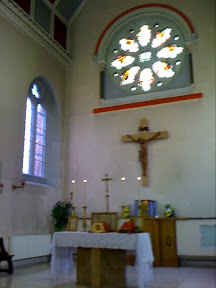 It is not often that we put together a Missa Cantata in Birmingham. The main limiting factor is availability of singers for the Latin Plainchant, which often takes an exclusive place in professional choirs due to its complexity.

Today was an initiative encouraged by the Latin Mass Society, to train singers and servers for the Traditional Mass. I feel it has created a good grounding for the future, and demonstrated keen local interest in the Latin Mass. 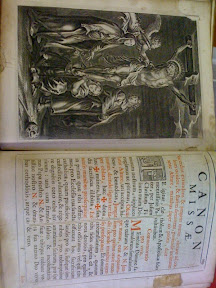 The training took place at St Michael's Church in the busy centre of West Bromwich on a Saturday afternoon. I began at 1.30pm with a brief introduction to the Gregorian Mass, in particular its unique aesthetic features which have been passed down through the centuries and the attention to the Latin text in the Missal, contrasting it with the changes in modern worship fashions.

Mr Oliver Hayes ably led the Chant rehearsal, with Mr Vincent Byrne providing organ accompaniment for Missa de Angelis. Full musical notation was provided, but the hour training only gave time to focus on the Ordinary, with the common tones of the Mass and Mass VIII. There were 19 present for this stream, with about a third from local Anglican communities completely new to Chant in the Latin language, raising concerns about pronunciation. The eager willingness was a real inspiration to me.

The second stream consisted of six of us rehearing the ceremonial of the Mass, serving in the sanctuary alongside the Choir practice. We began the afternoon with prayer, and our work was based on reverence for the Blessed Sacrament and the privilege of acting in clerical positions during Mass. Besides myself, there was one other server who was in the Society of St Tarcissius, with the other servers familiar only with the New Rite. My intention was to familiarise everyone with the roles below MC (Acolyte, Thurifer and Torchbearers) but in practice time was a limiting factor and we managed to at least perform a thorough run-through, with actual Mass being served reasonably well.

Fr George Grynowski from West Heath sang Mass for the Feast of the Guardian Angels, and was very impressed with the accompanying singing. Despite having sung High Mass, it was his first Missa Cantata since refining his skills at the latest LMS Priest's Training conference in Downside Abbey. He joined us for the last portion of the server's training and gave us appropriate encouragement and correction. He used the Missal's rubrics of incensation of a free-standing altar which took advantage of the reordered sanctuary of St Michael's!

There were several more people of course who joined us for the Mass itself at 3pm. I estimate there were a total of about 50, which was good considering the quick arrangement and limited advertising I gave it. Unfortunately the spacious choir loft was not utilised on this occasion due to the position of the organ at the front of church.

Refreshments were had afterwards in the church hall, and Fr George blessed the children's craftwork Guardian Angels which are keeping them safe in bed tonight (you might say this was a third stream for the afternoon with the younger age group and mother-cathecists!)

It seems the general consensus was a successful day, and something positive to build upon. If you would like to partake in any future activities, which will rotate around different areas of the West Midlands, please get in touch. It is a ground-up initiative to inject Tradition into our parishes, and a passion shared by many.

Published by Blogpress for my iPhone

I think this is a great initiative for the West Midlands giving us more opportunity to worship in more Churches. Thankyou for your hard work.