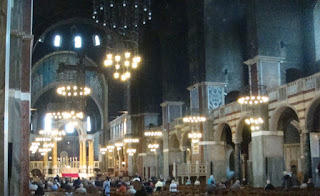 Yesterday we had the important occasion of the Annual General Meeting for all members of the Latin Mass Society of England & Wales. It was lovely to see so many friendly faces, and to be introduced to some of the other Reps from around the country. 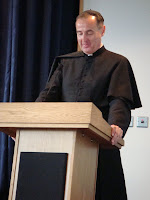 Fr Martin Edwards (right) gave an inspiring talk at the AGM. He has been a member from the early days, and first attended an AGM in 1982 (the year I was born!!). His talk which was essentially about the theological virtue of Hope in the context of the Holy Father's recent encyclical Spe Salvi facti sumus: "In Hope we are saved". (Romans 8:24)

The present, even if it is arduous, can be lived and accepted if it leads towards a goal, if we can be sure of this goal, and if this goal is great enough to justify the effort of the journey.
Spe Salvi Paragraph 1 (Pope Benedict XVI)

He reflected on the many years of patient perseverance on the part of traditionalists in this country, where the Latin Mass Society had an important effect internationally. From the early days in the late 60s and early 70s, with the support of Cardinal Heenan; to more recent difficulties securing the annual Mass at Westminster Cathedral; to last year's triumphant Pontifical Mass with Cardinal Castrillon de Hoyos! The culmination of staunch fidelity to the hierarchy amidst certain ridicule has led to a situation now of vindication for those "holy, stubborn and sidelined Catholic laity and priests" following Summorum Pontificum. What a relief! But there is clearly still much work to do.

Dr Joseph Shaw, the new Chairman, assured members that the great things we have seen in the last two years will continue in earnest. There are now two Priests Training Conferences per year, in Catholic institutions, with the latest in London Colney having the full support and encouragement of the Archdiocese of Westminster. 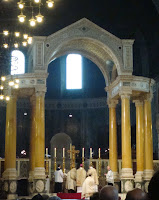 Furthermore, Dr Shaw has acknowledged that formation and catechesis are at the forefront of a Catholic renewal which the LMS should contribute towards. From my point of view, a rigerous and wholly orthodox Catholic education is the best thing I could want for my children, especially in the context of the extraordinary form of the Latin Rite which we choose to nourish them with. We believe, as traditionalists, that this is the best and safest way to instil in them the faith of our fathers. The crisis which we see in our Church has unfolded to be one of poor catechesis, and so what must have started as a visible change in worship has been exposed to have it's roots in deficient modernist philosophy corrupting Catholic thought. I, for my part, am thrilled by Dr Shaw's emphasis of this aspect, which includes the encouragement of Gregorian Chant and serving workshops and other initiatives to further what has been preserved all these years.

What many people were most interested in was the recent controversial resignation of members of the LMS committee including the Chairman Julian Chadwick. A full statement was read out which I would be happy to forward to anyone. It was agreed at the AGM to publically record our thanks for all their hard work over the years, and the fruitful ways in which they have promoted traditional Catholicism in these important times (despite the unfortunate circumstances surrounding their departure). The secretary assured us that it was a dispute of internal management, which is about to be thoroughly reformed, rather than any disagreement in the policies or direction of the LMS. 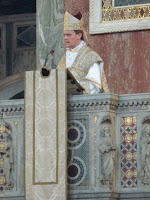 The Pontifical High Mass from the faldstool (above left) was celebrated by Bishop John Arnold, auxiliary of Westminster. This was an important touch since it indicates a direct involvement and approval on the part of the Archdiocese, rather than the LMS having to rope in a Bishop from elsewhere! The Mass was sober and peaceful, with the sounds of the Westminster Choir filling the vast expanse of the beautiful Byzantine building. I couldn't help but notice a small group of tourists wander in and become absolutely transfixed by what was happening during the Canon of the Mass. A powerful sight indeed! The belltower was ringing out during the consecration to awesome effect! Bishop Arnold gave a thoughtful sermon on the Sacred Heart of Jesus (above right), and that through His mercy everything He asks us to do for His glory, will be empowered by His grace.

If anyone else felt like me, I dareday we left stengthened, enlivened and encouraged to continue with renewed vigour and purpose! We are not fighting to ghettoise some sort of elitist remnant, but rather share a pearl of great price with all we meet. This is a Mass for enrichment; for parishes, for priests, for men, women and children: to experience a piece of our Catholic heritage, and deepen our knowledge and understanding of the mystery of Faith.
Posted by Unknown at 21:24